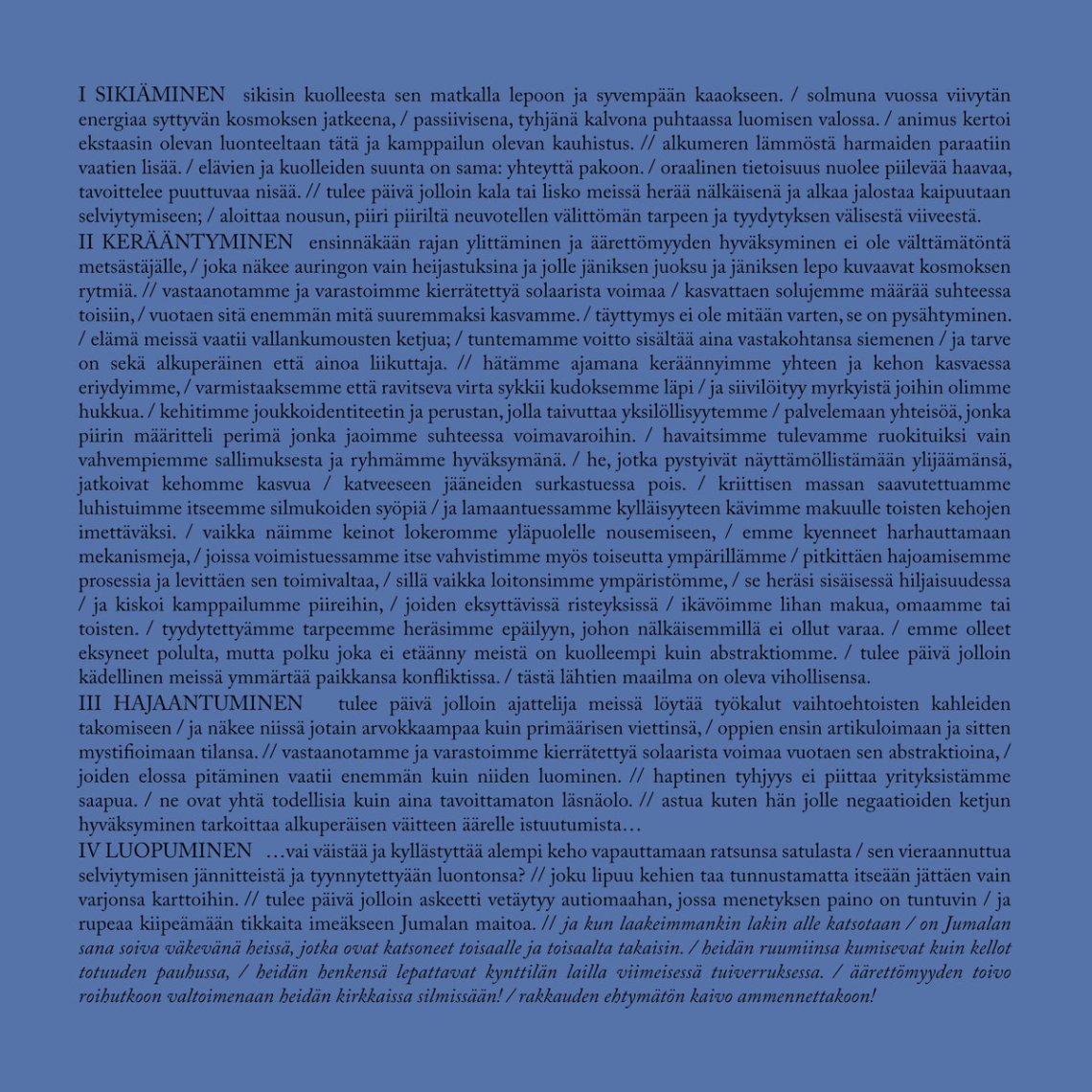 We begin this month on the stranger end of the black metal spectrum. Mörkö goes straight for the jugular in regards to the annihilation of the senses on the opening track, which after listening to the whole album, serves as one of the only real metallic tracks to be found here, but it is not any sort of typical metal formula. Not having listened to much else like this, I would describe this as atonal black metal. The weird riffs will not get your head banging, nor will the drums send you towards a frenzy. Instead, the strange, toned-down monotony works to transport you into other dimensions. The vocal style is perfect for this album, varying between manic screams and delirious spoken word sections that prove to be very jarring in combination with the dissonant guitars and machine-like drums. For Mörkö, the lyrics must be important to the album as they are not only treated greatly in the performance, but they take up the entire cover, which is something rarely, if ever, seen in any genre. Not understanding Finnish myself, I feel that I am missing out on an important component, but the lack of knowledge does not detract from the enjoyable musical experience within.

To make things even weirder, Mörkö employ different strategies to break up the atonal assault, and the second track “Kerääntyminen” ends with a labyrinth of synths that melt away the remaining minutes of the song as well as your entire brain. At first, drums are present, but they eventually die away and leave us with nothing but digital sounds from beyond the realm of earth. To extend the programmed tyranny, the next track “Hajaantuminen”  begins in the same fashion as the last ended, with a demented jazzy lullaby that is both trippy and deeply haunting. The song later transforms into a triumphant trumpet-like section that is simultaneously kept on the depressive end by the somber piano and the whispered vocals. It is a supremely bizarre situation for those that have stuck with the album for this long; there are many conflicting feelings inside your head thanks to the abrupt duality of the different musical elements. Rounding out this track is that same somber piano and guitar feedback, forming a cliffhanger for the listener as after experiencing this multitude of experimentation and emotion, you cannot be sure what is to come next.

Of course, the final track offers something entirely different while still sticking to this conflicting duality that creates so much power within this album. A summery, light-hearted guitar riff is introduced that, on its own, would be a pleasant listening experience. But Mörkö are having none of that, as the cheerfulness is kept in check by a melancholy organ as well as whispered vocals. Things take a turn later on with the introduction of synths being affected by a slight tape reel malfunction, which is a sound that immediately brings a smile to my face. The only other artist I have ever heard that introduces this element into their music on purpose is Kvmvlonimbvs, who is a deity in creating strange atmospheres with unexpected sounds. The guys in Mörkö have really conjured something special overall while saving some of the best moments for the final track. These ambient moments turn out to be the dominating feature on the last half of the album, proving that not only does each song have an overall duality, but the entire album is thread from the same cloth. Mörkö are masters of atmosphere and they continue to cement their status as one of the most unique Finnish projects going. This is an enthralling experience for those unafraid of the unexpected, and for those that desire something one-of-a-kind from the black/ambient department. 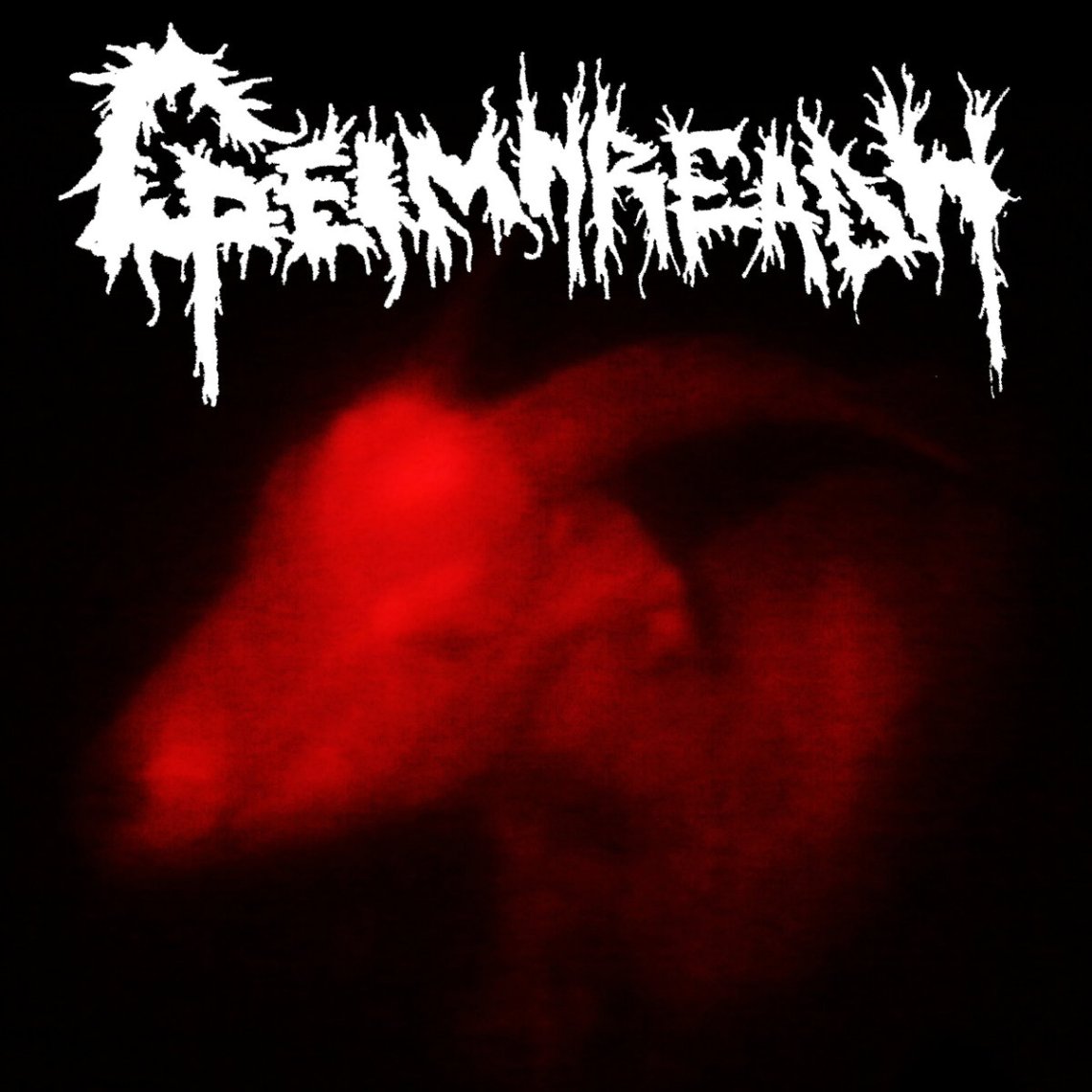 Geimhreadh are one of the very few true black metal forces in the state of Montana, and unbeknownst to them, a lot of expectation was riding on their debut album because this could be a staple of the scene for years to come. Luckily, they succeeded in transcribing everything that makes them great: the raw production and songwriting, the nihilist attitude in regards to artwork and song titles, and most importantly the unending passion to deliver a punishing affair. The abrasiveness of this release is perfectly encapsulated on the penultimate track “Anthropophagy”. The main riff slowly builds until halfway through, when the song is brought up to full speed, unleashing a hellish vocal rant that is absolutely seething with hatred and will involuntarily make your fists clench. The song continues to wax and wane with speed, but the riffs are an ever present force with the drums backing up perfectly, illustrating a tightly knit duo behind the music.

With song titles like “Colossal Farm Fuck” and “Final Fuck You”, how could you not be roped in to this abyssic ride of wild western black metal? The final fuck you is indeed a powerful statement. The vocalist is on a total warpath throughout the entire album, and she saves the best for last, delivering just a punishing exhibition in total hatred. This band’s style is refreshingly primitive, and yet for just two people they never run out of ideas. The variation of riffs is immense, and the way the drums match the guitar work is quite superb, not just on this last track but throughout the album. Another highlight of this chemistry is in the track “Visceral Macerations”. Parts of the song break down into punk-influenced sections, and also there’s a lot of start and stop riffing going on. Whether the band is operating at full speed or at a crawl, both bandmembers are always on the same page, with the songs containing that flair that you simply cannot find in one man bands or studio-only projects. This is the product of a band that has practiced together for many hundreds of hours, culminating in a release that will be one of the hallmarks of the local metal landscape for years to come, with an animosity that bands will draw on for a source of inspiration. It is anger not for art’s sake, but anger for anger’s sake. 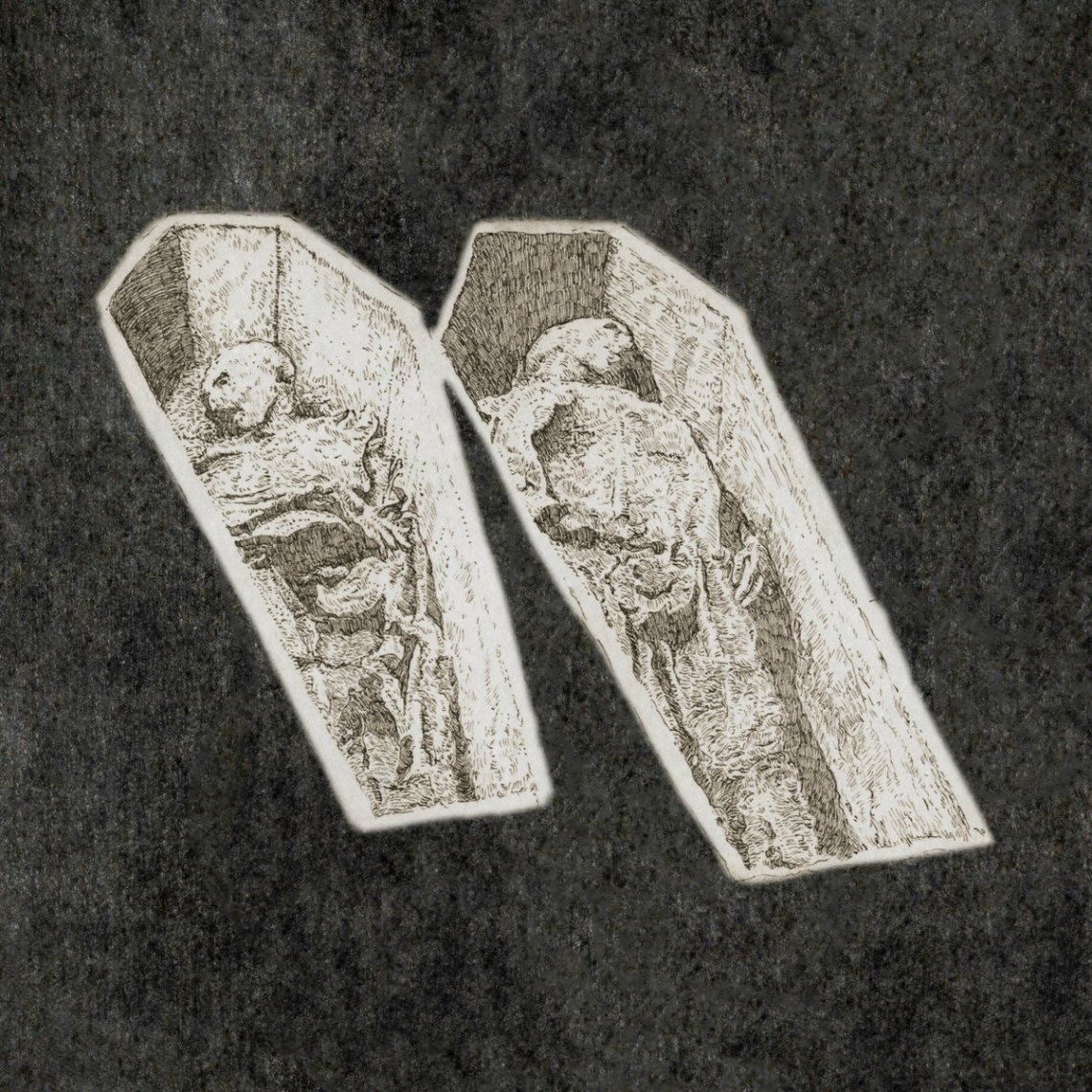 Mylingar have concocted a relentlessly brutal release for their debut album, suffocating listeners underneath the murk of rotten riffs and undead vocals. The production on this album immediately stands out; the guitars are strangely audible while delivering an absolutely punishing tone while the drums fit perfectly in the midst of the devastation. The riffs are played with a passion, and they appear in immense wealth. Every track is overflowing with headbanging variation and not a moment is wasted, exhibiting Mylingar’s sick desire to make the most of their short time here, instead of phoning in any aspect of this release. In the first track “Skammen”, the vortex of riffs is a mighty event to behold, and before long, the song has seemingly explored dozens of different themes before its violent conclusion. Who needs a chorus when you can have tracks like this? Mylingar are on a warpath with their unending creative force.

The vocals are some of the most deranged sounds I have heard emanating from a human in quite some time. The track “Början” cannot go unmentioned for the sheer unearthliness of the vocal performance. During the first third of the song, the vocalist lets out a devastating scream that continues for at least 15 seconds, before a deeper growl is layered on top to send all sanity over the cliff. While this may be a “studio trick”, it still speaks to the creativity of the band and their desire to translate multiple energies into their song. This track continues to give, as the wretched coughing near the end is followed by what can only be described as someone choking on fresh blood. This vocalist is totally off the rails, and this album would not be the same without him. A groundbreaking performance. 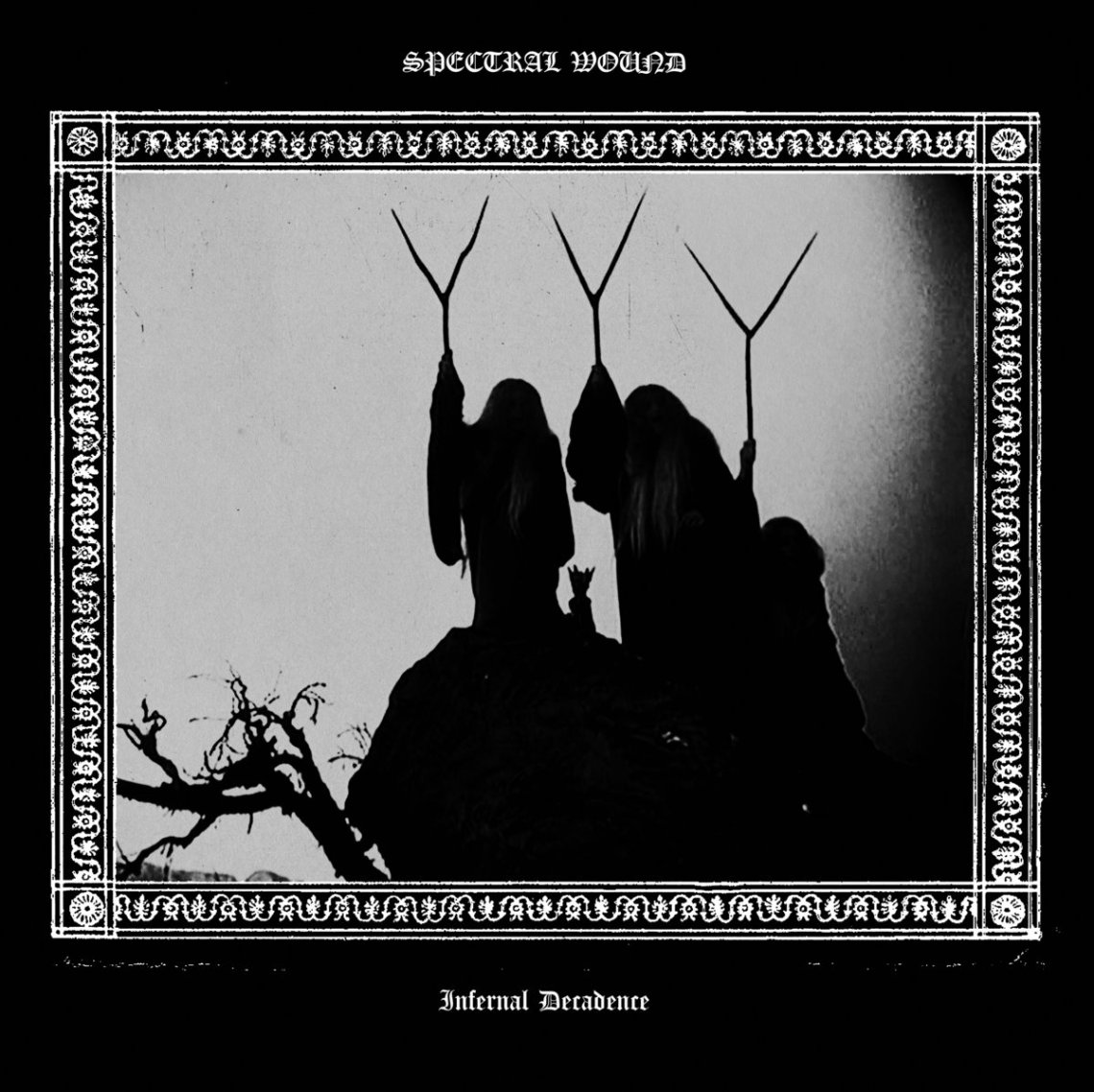 We discussed an album last week that contained elements of both the aggressiveness of Finnish black metal as well as the searing melodicism of the Metal Noir Quebecois scene. Well, more Canadians are back with this similar formula that proves to be immensely powerful. Spectral Wound have appeared mysteriously from the unknown to deliver a melodic riff masterpiece, evident right from the very first track. Near the end of “Woods from Which the Spirits So Loudly Howled”, as if you thought the track couldn’t possibly gain any more momentum, the melodic riff previously introduced as sort of a solo is overlaid with the climactic final riff, producing a transcendent experience of the highest order. The band doesn’t rest on their laurels by implementing some sort of interlude after this powerful moment, but instead resume the blasting at full force, giving the hint that more mastery is to be withheld.

Our assumptions prove to be correct in the next track “Black Satanic Glamour” with the appearance of a demented, wailing guitar solo straight from the darkest pits of the inferno. The next track is no slouch either, and may be the album’s best. A mightily compelling riff opens “Slaughter of the Medusa”, evoking the darkness that awaits. While the vocal performance across the whole album is beyond solid, it is on this track that the legacy is sealed. Deep yells are punctured with high shrieks whenever the vocalist is attempting to match the melodicism of the guitars. This duality is amazing to behold, with the band showing its proficiency in songwriting that is capable of delivering shining moments between every instrument all at once. The final minute of this track is simply sublime. Every bandmember’s performance goes off the charts to deliver a final coda of desolation. This album is not to be missed; a true spectacle of reverence to the old ways of black metal glory. 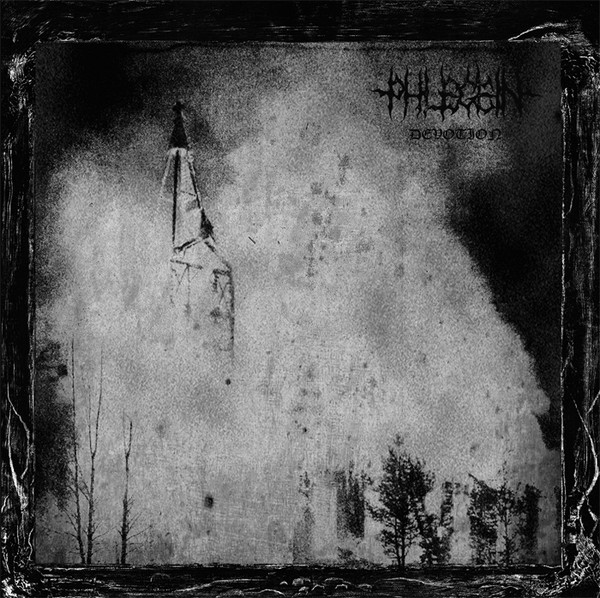 Phlegein are disciples of the Finnish black metal sound, with the intensity at the forefront of the experience here. The melodic riffs are present in droves, but what Phlegein executes to perfection is the production on these guitars. The sound is both raw and heavy, creating a balance so lethal that maximum volume does not seem to satisfy the ear. The production on the drums is super clean and powerful, creating a thundering force behind the guitars and vocals. While the drum performance is mostly blasting, it works perfectly on this album as brutality and stamina, not variation, is critical to this album’s traditionalist mission. Having said this, the third track “De Coeli Ardore” is noteworthy for the sheer might of its slower section, possessing a brief energy of sheer northern beauty before being lurched straight back into hell with an unbelievable riff and blast combination. A very moving moment on a supreme album.

The next track “Abysmal Fire” has a conquering feeling to it, due to the majesty of the riffs and the powerful vocal delivery. This intense sensation allows you to gaze upon the cover artwork, or perhaps any scene of destructive beauty, with calmness. Holy sites are being burned to the ground while the listener sits in awe of the beauty of the flames. Phlegein choose their artwork brilliantly as the energy portrayed in the art perfectly match the controlled chaos within the music. It may seem that Phlegein are following a basic formula with their traditional and pure approach to Finnish black metal, but they play and write these songs with a passion that separates them from being just another copycat band. The last couple minutes of “Fields of Madness” is all the proof that is needed. The song takes an abrupt turn beginning with a victorious howl, followed by an emotional, triumphant riff that overtakes the rest of the track, engulfing the listener in flames of the devotion of these musicians.